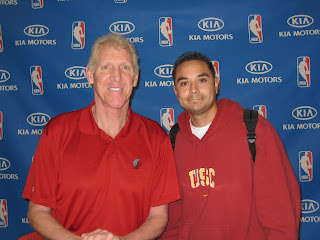 Bill Walton made an appearance at Kia Motors in Irvine. The autographs were free of charge and the event was better than I had anticipated. Breakfast and lunch were given out for free by Kia. I had Bill sign a basketball with the incsription "Hall of Fame 93". He also signed a couple of photos for me.

This is one of the best events I have ever been to. The line was indoors and all fans got to eat for free. It was also a small turnout which made it easier to get multiple items signed.

Video of the Bill Walton signing.


Thanks to Kia Motors for this really cool event. I would also like to thank the kind and courteous employees at Kia for making it an even better experience.
Posted by EDGAR at 6:27 PM