"Big Game" James Worthy made an appearance in Highland, Ca for a live LTV broadcast. During his broadcast breaks James would come to the side and sign autographs. It was not much of a crowd. It was more like a small group. Most people didn't even know what was going on until they noticed James Worthy. Pictures were not allowed inside but after I got my autograph I managed to record the short video below. After security noticed me I had to shut it off. 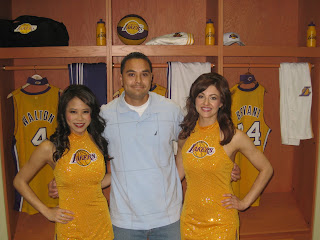 This was the worst event ever. No autographs! Nobody showed up to sign. Players would only do a Q & A session. Early in the morning before the event had begun, staff told fans that no Lakers would be signing autographs. One staff member said that they were having too many problems the day before with arguments and fights breaking out in the autograph line. The autographs were the only reason people even showed up to the Fan Jam. I still entered the event since I had already paid for my ticket.

I guess it was not a complete waste of time. The girls made up for me not obtaining autographs. I even felt one of the Budweiser girls boobs by mistake when I put my arm around her. She didn't seem to mind. To be honest. It was a waste of time and money. Not worth it at all. The people who went to the event Saturday ruined it for everybody going on Sunday. 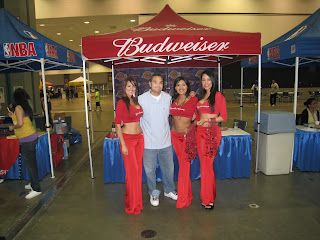 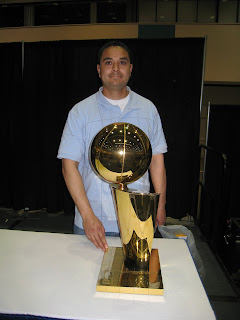 I recorded the video below of A.C. Green and Norm Nixon doing a Q & A session.
Posted by EDGAR at 5:54 PM No comments: 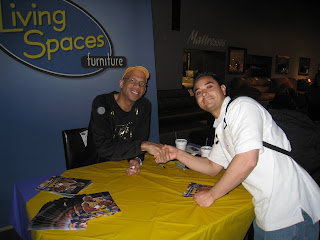 NBA legend Kareem Abdul-Jabbar made an appearance to sign autographs at Living Spaces furniture. The event was free and no outside memorabilia was permitted. Living Spaces would provide "Living Spaces" photos and basketballs to be signed. Like anyone even took it serious.

Most people showed up with basketballs and photos that they had purchased somewhere else. We were all hoping for that small chance that he would do any item of our choice. When Kareem started signing for the first couple of people in line I noticed that he was signing any item with one catch. He had to personalize it with your name. 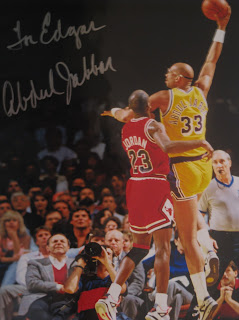 Check out the video that I recorded at the signing. 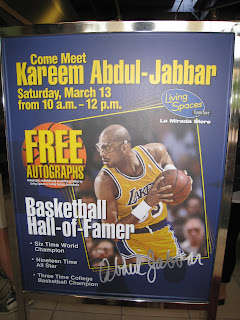 Thanks to Kareem Abdul-Jabbar and Living Spaces for this event.
Posted by EDGAR at 5:49 PM No comments: