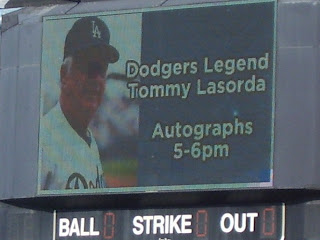 Dodgers legend Tommy Lasorda made an appearance to sign autographs in Rancho Cucamonga. The signing was to take place during a Quakes game. It was scheduled to start at 5:00 p.m. but Tommy arrived a little early and started signing about 4:30 in the afternoon. This was a good thing since every fan was baking for hours in the hot sun. In the end it didn't make much of a difference since the line moved very slow.

When I was near the autograph table Tommy started having a tantrum. Tommy was really pissed off because he didn't want to sign autographs while the game was being played. Maybe that was the reason he even showed up early. Once the game started he got very upset. Tommy even yelled at Quakes staff in front of fans. I wish I had recorded the tantrum on video but didn't.

When it was my turn to get an autograph Tommy signed my HOF Plaque and didn't even look at me. Like I said, he was really pissed off. The dude was turning red. I'm still glad I attended since I had a short drive and you can never have enough Tommy Lasorda autographs.

This was posted around the autograph area. 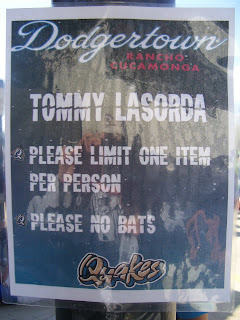 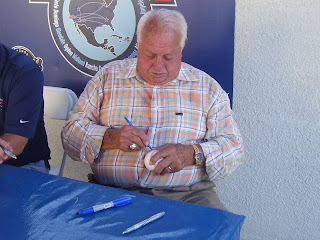 I noticed that Tommy rolled some baseballs back to fans. He didn't appear happy. 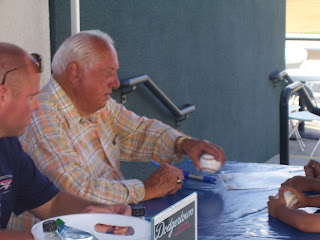 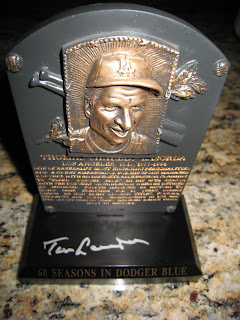 Unlike the event today, I met Tommy Lasorda three other times where he was in a better mood. Those posts are linked below.

Thanks to the Rancho Cucamonga Quakes and Grumpy Lasorda for this event. If you were there and have more info on this signing then please leave a comment.

Email: myautographsignings@yahoo.com
Posted by EDGAR at 9:09 PM No comments: 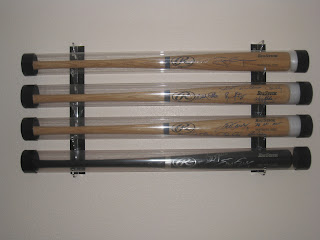 Some people ask me what I do with my autographed bats. If I put them away in the garage or display them. I display some of my favorite baseball bats on my wall. Last year I did a post on a bat rack linked here. You can purchase one just like mine at the site below. 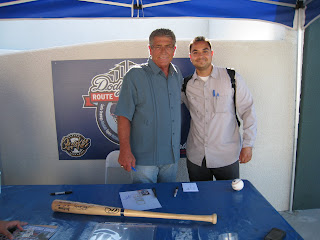 The Dodgers '81 World Series Tri MVP made an appearance to meet with fans during a Quakes game. Earlier in the day I wasn't sure on attending since I have already met Steve a couple of times. At the same time I knew it would be another easy autograph. After work I went home to get my items then headed to Rancho Cucamonga.

I arrived at the signing after it had started and noticed about 25 fans in line. The signing went as smooth as the Maury Wills appearance from last month. Steve posed for pics and signed all of the items that were put in front of him. After getting my items signed I got to meet Jack from JD Legends Promotions. In the end I was glad I attended the event.

Signing Recap:
Below is a short video of Steve meeting with fans.
I also have another post on meeting Steve Yeager linked here. Thanks to the Rancho Cucamonga Quakes and Steve Yeager for this event. Also, be sure to check out Jack's site linked below.

www.jdlegendspromotions.com
Posted by EDGAR at 8:50 PM No comments: 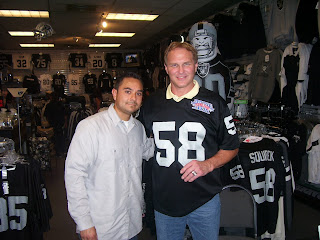 Former Raider Jack Squirek made an appearance at The Raider Image to meet with fans. This was another signing where I arrived directly from work. When I showed up at The Raider Image Jack was all alone. Jack had 8.5 x 11 photos available for purchase at $15 a photo. Any additional photos would cost $10 each. I quickly chose a photo, got my photo op and left Ontario Mills. I was in and out of the mall within 5 minutes.

I'm not a Raiders fan but go to The Raider Image events time and time again. It seems as if The Raider Image in Ontario has a former Raider make an appearance every month. It's always an easy autograph. No need to wake up early, camp out, or wait in a long line.

Jack's career highlight was when he intercepted Joe Theismann's screen pass right before halftime in Super Bowl XVIII. I also have a post when I met Joe Theismann linked here. The video is via YouTube.


Thanks to Jack Squirek and The Raider Image for this event. 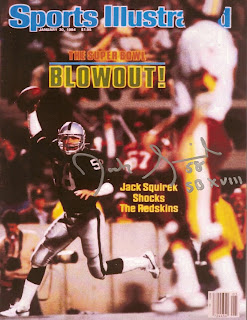