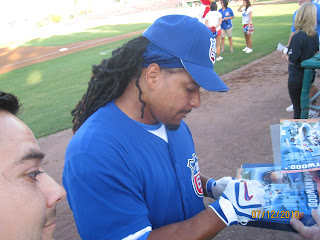 Manny Ramirez made his third straight rehab appearance with the 66ers going 0-for-3 with a strikeout and two groundouts. In his three games with the 66ers he went a combined 0-for-9. I went to all three games in hopes of obtaining his autograph. The previous game Manny didn't sign for anybody before the game. He only signed for a couple of people in the parking lot on his way out. In the end going to all three games paid off. I was finally able to get his autograph.

When Manny was done with warm-ups he came over and signed for about 20 people. Manny signed a Rawlings big stick bat and a Dodgers mini bat for me. My nephew who went with me got him on a jersey. All he did was initial but it's better than nothing.

I had fun all three games. Girls, baseball, and the opportunity to see Manny up close in person three days in a row was well worth my time and money. Not to mention the tickets are dirt cheap. As far as the score, the 66er's lost once again to the Lancaster Jethawks 3-2.

Video of Manny signing autographs.
Posted by EDGAR at 11:02 PM No comments:

Manny's second game with the 66er's

Manny Ramirez played his second game with the 66er's. It's weird that he was doing well with the Dodgers but is struggling in single A. In the 2 rehab starts so far he is 0-6 with 4 strikouts. I can't believe he can't get a hit off of Single A pitchers.

The 66er's lost once again to the Lancaster Jethawks 4-0. After Manny's last at bat I waited in the parking lot. A worker for the 66er's tipped me off on what car Manny was driving. I then headed out to the parking lot and waited by his car. It was only a small group of about 6 people. I didn't get his autograph but was happy for the people who did. Manny blows me off for the second straight day. check out the video below.

Manny Ramirez in the Inland Empire

No All Star Fan Fest for me this weekend. I decided to spend the money on my sports room instead. I ended up going to the 66er's game in San Bernardino. Manny Ramirez and Brad Ausmus made rehab stints with the Inland Empire 66er's. Manny went 0-3 while Brad Ausmus singled in all 3 of his at bats. The 66er's ended up losing to the Lancaster Jethawks 5-3.

I shot this video of Manny signing autographs for his fans.