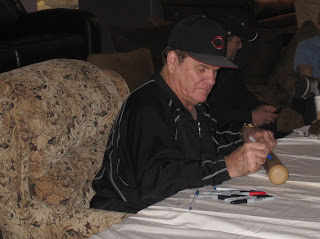 Baseball's "Hit King" made an appearance at Living Spaces Furniture to sign autographs. For some reason I wasn't able to sleep the night before so I headed out to make line for this signing very early. I arrived shortly after 1:00 a.m.

After arriving I noticed that it was a little awkward. It was like a bunch of dudes having a slumber party outside of Living Spaces. Chairs, blankets, and even air mattresses were set up by fans outside of the store.

This signing was scheduled from 10:00 a.m.-12:00 noon. Pete arrived on time and then began to sign items for the fans. A no flash photography rule was setup by Living Spaces staff so most fans didn't get to take pictures. It didn't matter. As long as we got our items signed we were happy.

Thanks to Living Spaces and Pete Rose for this appearance.

I had the opportunity to have a meet & greet with Pete Rose two years ago. It was at Field of Dreams in Las Vegas. 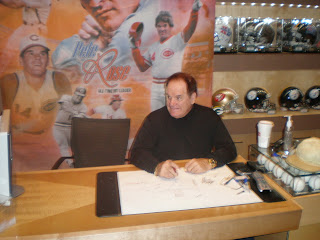 I was able to sit next to him while he signed my item. He even made conversation with me. 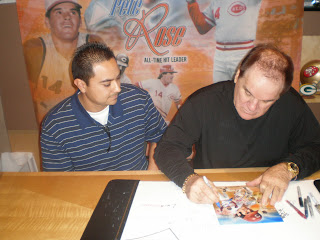 It's a coincidence that I'm wearing the exact same shirt that I wore at his Living Spaces appearance. 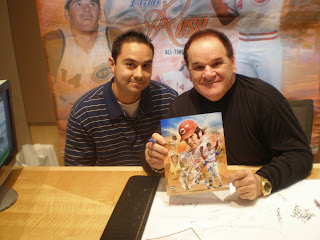 Some friends even got into the mix. They got to meet Pete Rose without paying a penny. They didn't even know who he was. 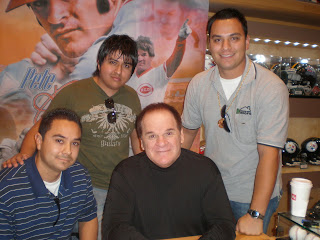 Thanks for reading.
Posted by EDGAR at 4:49 PM