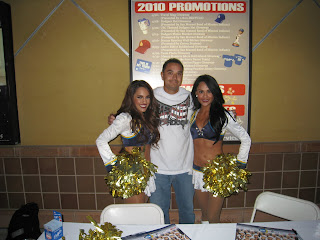 I have not been to any signings lately because I have worked the last three Saturdays. During that span I missed Ron Artest and former Dodger Orel Hershiser.

Some Charger girls made an appearance during the 66er's game tonight. In a way it was better than meeting pro athletes. I would rather meet woman than dudes. Know what I mean?

It turned out good though. I was able to get former Dodger Charlie Hough before the game. I had never bothered trying to get his autograph in the past. He is an easy autograph for those of you that plan to attend a 66er's game this season.

Just wait on the third base side before the game and he will show up with the games starting pitcher near the bullpen. Call him over and believe me he will come. He never turns down anybody. It's an easy autograph. The video below proves it.