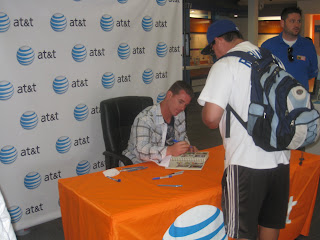 Dodgers pitcher Chad Billingsley made an appearance at an At&t store in West Covina. It was the same location where Juan Rivera of the Angels signed autographs last year. Many signings were taking place today. I decided to go to the Billingsley signing since I have missed all of his other signings in the past. I arrived just shortly before 8:00 am. About 50 people were already ahead of me.

Chad arrived on time at 11:30 am and the line started moving. I looked at the line and was surprised by the large turnout. My estimate would of been around 300 people in line once the signing had started. I thought less people were going to show up since a couple of other signings were taking place around the same time. Posed pictures were being allowed with Chad but it was stoped after maybe 30-40 people. At&t made that decision because the line was moving slow.

Signing Recap:
Video of Chad signing.
The autograph line was very long. I took this picture when I was leaving. 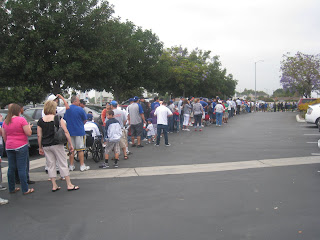 Thanks to At&t in West Covina for this free event.
Posted by EDGAR at 6:16 PM