Manny back in the IE 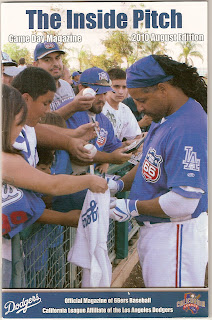 I like the new 66er's program cover. As you can see Manny is on the cover signing for the fans before one of his rehab appearances. I don't know what day the photo was taken. Could be from last month. Anyways, Manny Ramirez made three consecutive appearances with the 66er's this week in San Bernardino. I went to two of the games.

Autograph Recap:
I recorded the video below on Thursday. Manny pretty much didn't have a choice but to sign for a handful of people. Manny came out with no security so we had to take advantage.