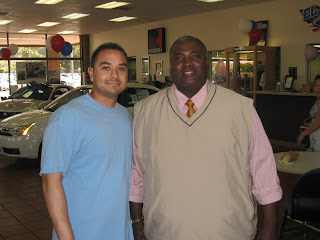 I only attended about 25 signings this year. That's nothing. I know some guys that do more than 25 signings in less than six months. I love this hobby but have to be careful in which events I go to from now on.

The event that I liked the best this year was the signing that featured Hall of Famer Tony Gwynn. It took place in the San Diego area back in May of this year.

Tony was one of the best signers. It was a free signing but it seemed as if the fans were paying for the autograph. He "sweet spot" every baseball given to him and always included his Hall of Fame inscription without even asking him.

This was my favorite autograph signing of 2010. At least it was for me. Why?
Months after this signing Tony was diagnosed with cancer of a salivary gland. I wish him the best of luck.

Thanks for reading.
Posted by EDGAR at 8:44 AM