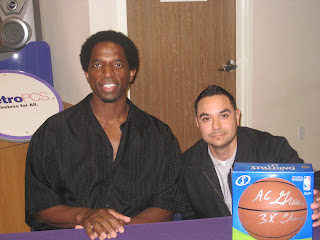 NBA Iron Man AC Green made an appearance at Metro PCS in Pomona. Michael Cooper was originally scheduled to make this appearance but cancelled due to his duties with the USC woman's basketball team.

I already had some AC Green signed items from the past so I wasn't planning on going. I was working about 30 miles away from Pomona so I decided to take advantage of the short drive. Compared to most of the signings I go to, 30 miles is a short drive for me.
This signing was scheduled from 5:00-7:00 pm. I got off work a little later than expected and arrived at almost 6:45 pm. I barely made it!
Signing Recap: 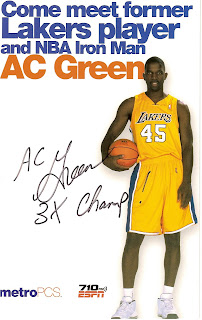 Thanks to AC Green, Metro PCS Pomona, and ESPN 710 for this appearance.
Posted by EDGAR at 10:20 PM