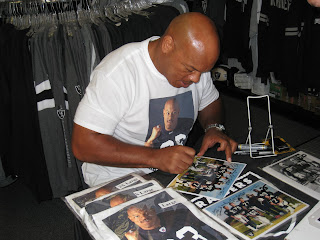 The last six signings that I have attended have been right after work in the Ontario area. This time it was for another Greg Townsend appearance at the Raider Image. I couldn't make it out to the Luc Robitaille appearance in San Bernardino so I ended up heading out to Ontario instead.

When I arrived there was only one person in line. I got my items signed and talked some football with Greg. He told me that he thinks the Raiders have a good chance at making the playoffs this season. I hope they don't. I'm not a Raider hater but I'm not a Raiders fan if that makes any sense.

Here is Greg holding my two big autographed cards. He was selling shirts like the one he is wearing. I didn't bother asking him for the price of each shirt. Maybe if I was a Raiders fan. 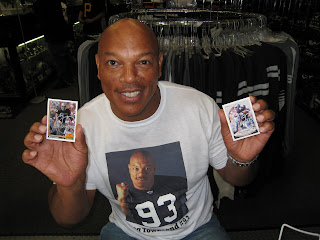 Greg charged me $5 to take a photo with him. 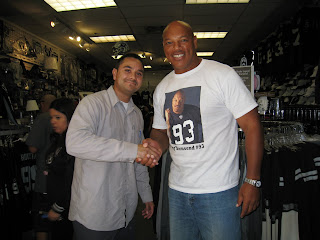 I figured I would get my moneys worth and ask him for a second pose. 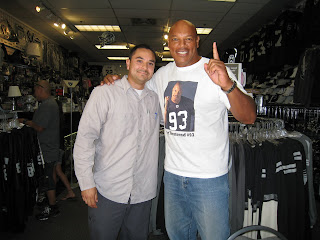 I have two other posts on Greg Townsend appearances linked below.

Thanks to the Raider Image and Greg Townsend for this appearance.

Questions or Comments? Email me @ myautographsignings@yahoo.com
Posted by EDGAR at 5:23 PM