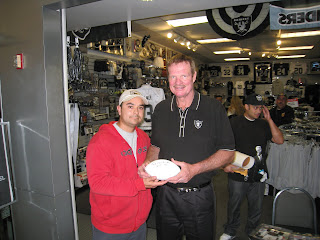 NFL Hall of Famer Ted Hendricks made an appearance at The Raider Image in Ontario. After work I decided to head out to Ontario to meet this Raiders great. When I arrived I noticed that a line had formed outside of the store. It wasn't a huge turnout but that's usually expected at a paid signing.
Ted arrived earlier than expected and started signing right away. The line moved very slow since Ted took his time to meet with fans and take photos. He also included his Hall of Fame inscription with every autograph purchased. It was another easy signing at The Raider Image.
Signing Recap:
"Please sign the ball here". 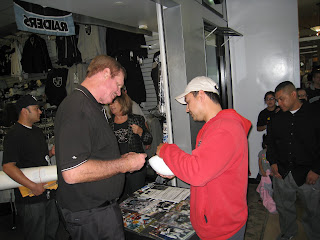 Ted must of got tired of sitting down. He signed
autographs while standing up for a good portion of the line. 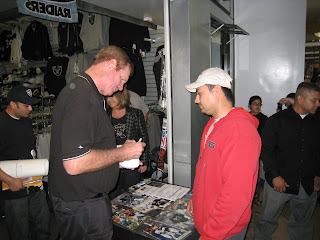 I love the fact that former players actually sign their names.
Most current athletes just scribble and initial when they sign autographs. 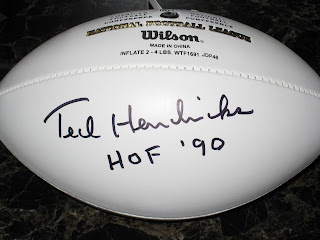 This has nothing to do with the signing but here it is. Since this was a football signing, I will end this post with a skit from the television show In Living Color. The skit is titled "Men on Football" featuring Damon Wayans and David Allen Grier. Both men discuss football from their point of view.
Email: myautographsignings@yahoo.com
Posted by EDGAR at 8:59 PM