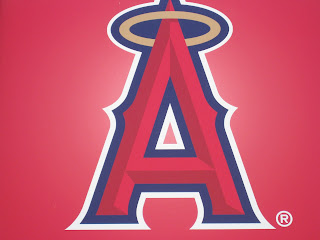 The Anaheim Angels single A affiliate hosted a Meet the Team BBQ at San Manuel Stadium in San Bernardino. I found out about this event on short notice but decided to go since I only live about 10 minutes away from the stadium. Admission for the event was $15 and well worth every penny. It was an all you can eat buffet of hamburgers, hot dogs, BBQ chicken and sides. Not to mention a chance to meet some future Angels and eat with them.
The 66er's showed up shortly after the fans arrived. They served themselves a plate of food and picked a table to sit at. I went to this event alone and didn't know anybody. A group of Dominicans were eating at a table near me so I got up and asked them if I could sit with them. They were very cool and talkative.
Once people were done eating the players stood up one at a time and introduced themselves. All of them gave their name, position, jersey number and where they were from. This was a another good event given by the 66er's front office. It's not as great as the Meet the Team Dinner featuring Tommy Lasorda when they were affiliated with the Dodgers but it's better than nothing.
The new coaches for the 66er's are former Major
Leaguers. They are Bill Haselman and Paul Sorrento.
Here I am with the new 66er's hitting coach Paul Sorrento. 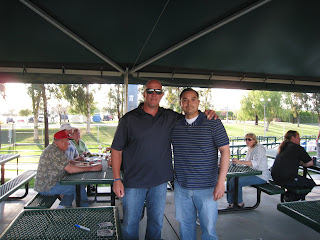 I looked in my brothers collection and found some Paul Sorrento
cards. I took these to the event and Paul was more than happy to sign them. 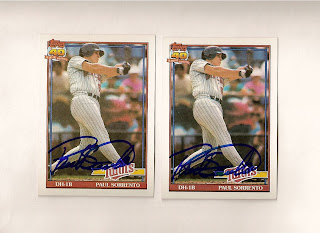 Maybe this was posted last season but didn't pay attention to it. Around the stadium are large posters titled "San Bernardino Professional Baseball Alumni". At one point or another all of these guys played in San Bernardino. 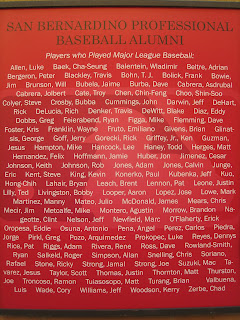 Thanks to the Anaheim Angels single A affiliate for this event.
Posted by EDGAR at 9:14 PM