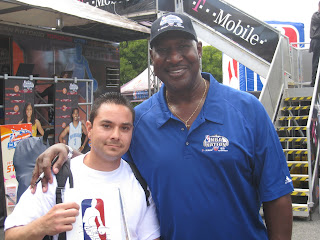 NBA great Darryl Dawkins was the ambassador for the annual NBA Nation event. The NBA Nation event took place at Universal CitiWalk. Some activities were scheduled for the fans but I just went for the autographs. Darryl did not disappoint any fans at the NBA Nation event. He signed for everybody that came up to him. He was very kind to the fans and helped kids while they did some of the activities. After getting my autograph from Darryl Dawkins I went to make line for Minnesota Timberwolves center Kevin Love.