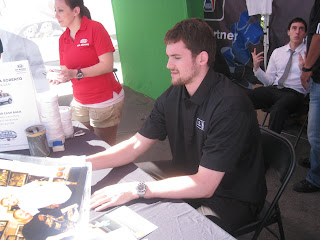 Minnesota Timberwolves Center Kevin Love made an appearance at NBA Nation to sign autographs. Kevin signed after James Worthy who had appeared earlier at the same event. Most of the people left after the Worthy signing so their was not much of a line for Kevin Love. Kevin signed a couple of small pictures for me that were provided by Kia Motors.