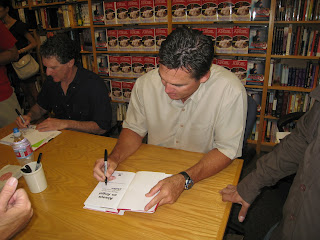 Former Angel Tim Salmon signed copies of his new book "Always An Angel" in Brea. Tim did sign some outside items but just for very few people. By the time that I made it to the front of the line they really enforced the "book only" rule. I didn't really care since I met him three years ago at a Boomers Theme Park in Irvine. At that signing I got him to sign a ball for me.

The turnout was bigger than I expected. I believe that it was between 200-250 people. The line moved pretty slow but it was because Tim greeted everybody. It was an actual meet and greet event. He took the time to talk to fans and thanked everybody for coming.


Thanks to Borders Books in Brea and Tim Salmon for this appearance.
Posted by EDGAR at 6:07 PM