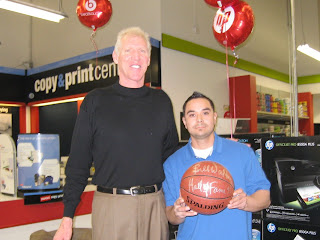 NBA Hall of Famer Bill Walton made an appearance to sign autographs at Staples. This signing was scheduled from 1:00-2:00 pm. I arrived around 9:00 am and thought the event was cancelled. Nobody was there. I had to double check with Staples employees to make sure the event was still going to take place.

Most fans didn't show up until about noon. The reason is so much stuff was taking place all over L.A. including this Bill Walton signing. Jason Richardson, Robert Horry, Chris Paul, Dwight Howard, and Tony Parker were also making appearances around the same time in other locations. It seemed as if most fans came directly from other signings. I liked it because it split up the crowds.

Bill arrived about 15 minutes late. He apologized to the fans for it. He gave his usual pre signing speech.

"I apologize for being late. I was given the wrong time" 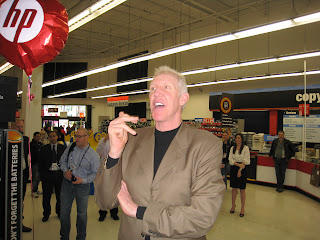 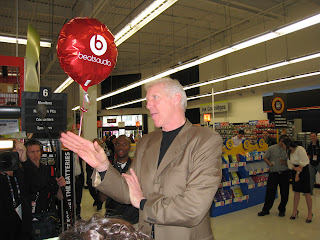 "I will sign all of the items you brought today." 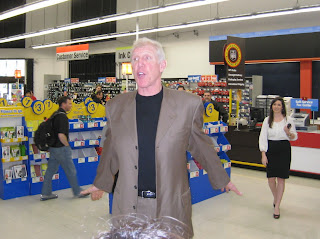 Here is Alex getting his ball signed. 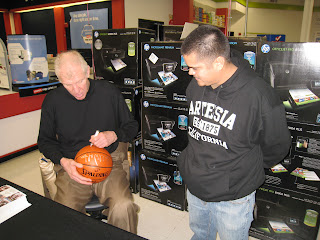 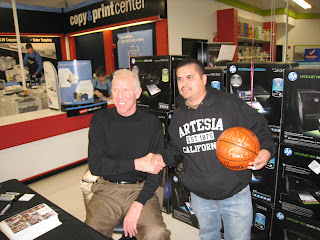 Here is Bill signing a UCLA jersey. Bill asked a staples employee to stretch the jersey. 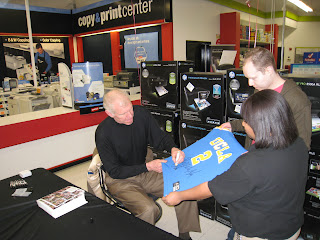 Here I am getting my ball signed. 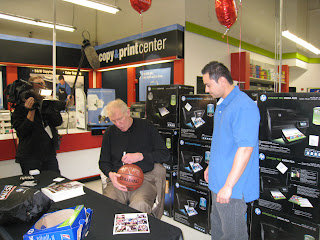 Bill inscribed "Hall of Fame '93" on all basketballs. 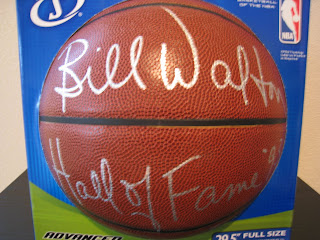 Tons of stuff was going on this entire week. Dwayne Wade, Kevin Durant and Ray Allen even made appearances in the L.A. area. The thing is I couldn't get away until the weekend. I'm at least thankfull that I was able to meet this NBA Hall of Famer once again. I also have a post on a Bill Walton signing from 2009 linked here.
I would like to thank Staples, HP, 710 ESPN and Bill Walton for this appearance.

To those of you that attended some of the other basketball signings this week. Shoot me an email. I would like to know how the other signings went.
Posted by EDGAR at 5:30 PM