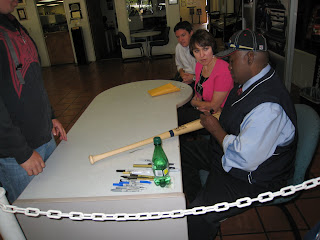 Baseball Hall of Famer Tony Gwynn made an appearance at a car dealership to sign autographs. The event took place at El Cajon Ford in the San Diego area. I wasn't planning on attending this signing since it's a very long drive for me and gas prices are ridiculous right now. I was able to find a carpool which convinced me to go.

There was a bigger turnout this year than at Tony's last appearance at El Cajon Ford. My guess would be that there were about 50-100 people more this time around.

Once the signing started staff from the dealership told fans that Tony would only sign one item. It was only a one hour signing so they wanted to get as many fans through the line as possible. It made the line move a little faster so I guess it was a good thing.

The dealership had a nice Tony Gwynn commemorative display in the office area. As you can see it contains many items such as Wheaties boxes, hats, shoes, jerseys, balls and bats. Some of the items were even signed by Tony. 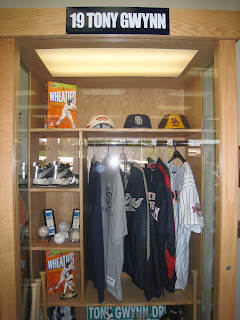 This is the bottom of the same display. 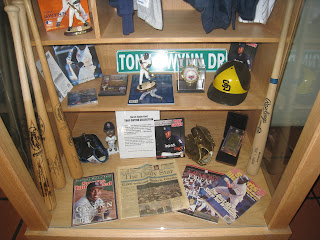 Tony inscribed "HOF 07" on all baseballs. 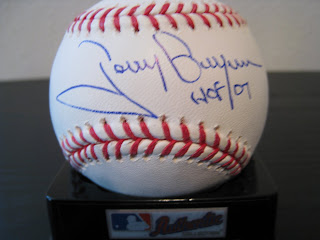 Thanks to El Cajon Ford and Tony Gwynn for this free event. 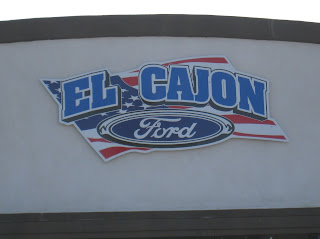 Here is a video that I recorded at the signing. It's a little sloppy since I had my hands full with my items. Towards the end of the video Tony asks if someone is selling baseballs in the line. If your reading this, you know who you are.

Click here if you want to read about Tony's last signing at this dealership.
Posted by EDGAR at 8:05 PM