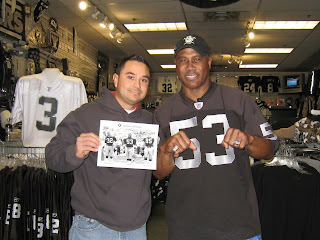 My first signing of the new year. Rod Martin made an appearance at The Raider Image in Ontario. The signing was scheduled from 3:00-7:00 in the evening. I arrived a couple of hours into the signing and only a few people were there. Rod had a table full of 8X10 photos to choose from. I chose a couple of black and whites for him to sign.
I finally got to meet Rod Martin. He makes appearances all the time but mostly in the L.A. area. I patiently waited for him to make an appearance at The Raider Image in Ontario and took advantage of it.
Signing Recap:
Below is a video of why I love going to these Raider Image signings.
I recorded the video as I arrived at the store. No hassles, long lines or bullshit.
Rod Martin played ball at USC. He told me he believes USC
will play for the National Title next season. Fight on! 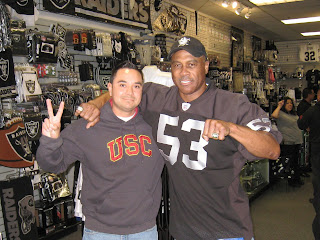 Thanks to The Raider Image and Rod Martin for this event.
I would also like to thank Andy for the photo.
Email: myautographsignings@yahoo.com
Posted by EDGAR at 7:36 PM